The completion of the sequencing of the human genome and the advent of technologies to explore it including genome-wide microarrays and next generation sequencing presents a unique opportunity to chart the vast non-coding regions of the human genome as never before. It is becoming increasingly apparent that even a complete understanding of the coding (protein or RNA) regions of genes will not explain either the incredible developmental and physiological complexity of humans or the abnormalities that occur in disease states such as cancer. In particular, it will be important to explore the epigenetic alterations and abnormal transcriptional regulation that play a central role in the development and progression of cancer.

The cells in a multicellular organism have nominally identical DNA sequences (and therefore the same genetic instruction sets), yet maintain different terminal phenotypes. This nongenetic cellular memory, which records developmental and environmental cues, is the basis of epigenetics. The lack of identified genetic determinants that fully explain the heritability of complex traits and the inability to pinpoint causative genetic effects in some complex diseases, such as cancer, also suggest possible epigenetic explanations for this missing information.

Epigenetics is rapidly becoming a high profile emerging area for biology in general and cancer in particular. Today researchers have realized that while the human genome is highly conserved, it is extremely adaptive and interactive with its internal and external environment. DNA sequence alone does not reflect all our genetic information and it is the “epigenome” within an individual or a cell that can vary to give rise to different phenotypes. Thus, the health and disease state of a cell may not just reside in the genes but also in the epigenetic regulatory network, which bridges the gap between “nature (genetic) and nurture (environmental)” to influence a cell’s development. Some argue that the phenotypic differences between genetically identical individuals or cells (e.g., monozygotic twins or clones), might be attributable as much to epigenetic variation as to environmental influences.

Epigenetic processes may also have a significant influence on cell differentiation, imprinting and X chromosome inactivation, which all have important implications for the treatment of cancer and genetic disorders, the development of stem cell therapies and RNA interference-based therapies. A variety of molecular mechanisms have already been elucidated in epigenetics including: DNA methylation, histone modifications, chromatin remodeling and changes in non-coding RNAs (Figure 1); but the challenge remains how these pathways inter-relate to regulate gene expression and ultimately control cellular phenotype. Accurately identifying all sites of epigenetic modification across the entire genome will help to understand the biological basis for regulation of gene expression patterns in different cell types, across species, in response to external stimuli and in pathological states. 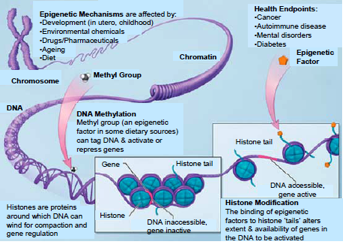 Many cancer biologists have come to think that DNA methylation and other epigenetic changes might be as important as genetic mutations in causing cancer (Figure 2). Epigenetics appears to play a pivotal role in the development of cancer either through mutations in epigenetic regulators or changes in epigenetic markers such as DNA methylation or histone deacetylation, which in turn modulates the expression of coding and noncoding RNA. Epigenetic inactivation of pivotal genes has been shown in a wide variety of cancers including apoptotic and angiogenesis genes, DNA repair genes, tumor suppressor genes, as well as cell cycle regulators. Conversely, reactivation of these genes can result in the suppression of cell growth and increase cell sensitivity to chemotherapeutics.

It is worth noting that GWAS studies have shown that the genetics of cancer are very complex and provide an incomplete view of risk and outcome. Adding on the epigenetic information will greatly expand our functional understanding of genetic variations. Also, variations on the “Cancer Stem Cell” hypothesis are similar to the belief that the “Stem cell” is not genetically different from progeny, but merely at a different state of differentiation. This different state of differentiation must be due to a different epigenetic state of this cell type and thus epigenetic studies could be extremely valuable in understanding such “stem cells”. 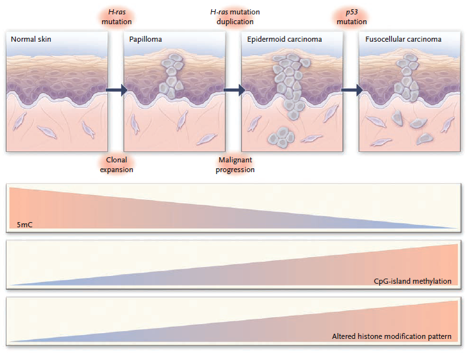 A multistage model of carcinogenesis in skin is shown. In conjunction with phenotypic cellular changes and the accumulation of genetic defects, there is a progressive loss of total DNA methylation content, an increased frequency of hypermethylated CpG islands, and an increased histone-modification imbalance in the development of the disease. H-ras denotes Harvey–ras oncogene, and 5mC 5-methylcytosine.
Source: N Engl J Med 2008;358:1148-59. Copyright © 2008 Massachusetts Medical Society

The growing understanding of epigenetics suggests a new way of treating cancers, because unlike mutations, changes to a gene’s methylation can be reversed. For example, silenced tumor suppressor genes might be turned back on. In theory, this might be done with compounds that lead to the loss of the methyl groups from DNA by interfering with the enzyme DNA methyltransferase (DNMT). Thus, epigenetics is of interest to the pharmaceutical industry as the elucidation of epigenetic networks may open up new opportunities for biomarker discovery and the development of diagnostics. In addition, the identification of novel chromatin modifying enzymes may provide new opportunities for pharmacologic intervention. Numerous established pharmaceutical companies and start-ups are actively beginning to pursue this promising venue.

Epigenetic biomarkers of disease may be used to help validate small molecule developmental candidates during preclinical assays while chromatin modifying enzymes may provide novel targets for therapeutic intervention. In addition, the regulation of epigenetic pathways may be important in the establishment of robust in vivo animal models of disease, as well as reprogramming stem cells for the development of regenerative medicines.

Many companies have invested in biomarker technologies during the last five years. However, it is only recently that industry has started to take an interest in epigenetic biomarkers, driven by their commercial application in diagnostics and the growing body of evidence that epigenetic mechanisms are important in a broad range of diseases. DNA methylation has emerged as a promising biomarker as it is stable, easily detectable and has been implicated in a number of diseases, including cancer. Similarly, alterations in modifications of histones have been linked to deregulated expression of many genes with important roles in the development and progression of disease, but the technologies needed to perform these studies are labor intensive and costly. DNA methylation techniques permit the sensitive and quantitative detection of hypermethylated tumor-suppressor genes in all types of biologic fluids and biopsy specimens. The establishment of DNA methylation and histone-modification profiles of the primary tumor specimen itself might be a valuable tool in determining the prognosis and predicting the patient’s response to therapies. The methylation state of a number of genes is no longer speculative as tests have now appeared on the market to show it as a predictive marker for various cancers, helping to monitor the course or treatment of the disease. The first blood-based epigenetic test, Epi proColon (Epigenomics AG), was launched in the U.S. in October 2009.

Although there is still much work needed to uncover the underlying mechanisms of epigenetics, researchers believe it has great potential for the development of therapeutics as, unlike genetic changes, epigenetic changes are potentially reversible and ‘druggable’. The development of new drugs and diagnostics based on our understanding of epigenetic mechanisms and the ways in which they cause changes in gene expression, is an area of research which has already produced commercial products. Four drugs have already been marketed in this area, and they represent the tip of the iceberg. A large numbers of individual enzymes responsible for making specific alterations to histones have now been identified and are the focus of drug discovery efforts. To this end, there are already a number of pharmacological compounds under evaluation (e.g., selective DNA methyltransferase (DNMT) inhibitors and the histone deacetylase (HDAC) inhibitors), which have been shown to “restore” the normal epigenetic function and hold much more promise in cancer than other therapy areas.

Working with the CFCE

The CFCE laboratory, sequencing, and data analysis expertise are available to all Dana-Farber and Harvard affiliated schools and hospitals as well as external academic and industry researchers.

For more information or to submit a request for sequencing services please contact us.